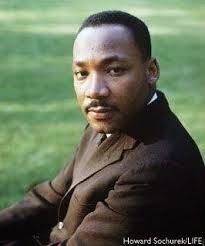 Martin Luther King believed that one day black men and white men, Jews and gentiles would all come together and sing in that negro spiritual:

Today, we are ALL far from free. Black man, white.  All of us.  Today there is less individual freedom than there was in 1968.    Yes, Martin Luther King believed in freedom, the constitution and most of all PERSONAL RESPONSIBILITY.   He wanted a level playing field for blacks who wanted education and wanted to work hard.

For political reasons alone, the tremendous progress of the Civil Rights era and the fact we have black supreme court judges, brain surgeons (Dr. Ben Carson), celebrities and a half-black man in the White House is downplayed.

History proves there is truly equal opportunity for those who want it and wish to work hard.  For those who don’t there is low pay, poverty and welfare.    This is a reality and not a racial one.

The rally cry of the new civil rights leaders like Al Sharpton and Jessie Jackson is racism, police brutality.  Never do these propagandists point out that effort brings achievement and there has been over the last 50 years great achievements in the black community.

All of these great achievements by blacks must be downplayed and those in poverty in the black community must be made out to be victims of the white man, slavery and sins of Our Founding Fathers.

This is a simple statistical reality.  But those who wish to transform America cannot allow the truth to spoil their divide and conquer agenda.

Martin Luther King did not believe in welfare as a solution.    In fact, generational welfare has proven to be the worst thing ever to happen to black America since the days of slavery, for we are all now slaves to this authoritarian socialist agenda adopted and pushed by the controlled mainstream media.

MLK would’ve fought to properly educate Our children, not indoctrinate them with Common Core Communist styled education.    He would’ve opposed the black genocide committed by Planned Parenthood, who target poor black and minority communities as their Gov’t funded cash cow. MLK would’ve opposed all the wars for corporate profits and collectivist control over America.

He would’ve exposed that with all the rehetoric about creating jobs, jobs, jobs for American’s while American companies gain incentives to off shore labor and manufacturing to other countries by OUR GOV’T! Forces controlling Our Gov’t agenda have worked dilligently to create jobs in China and elsewhere while American’s buy those shit products further enriching greedy corporations, some who pay NO TAXES and the furthering of the collectivist agenda to create a neo-feudal world government.

In his death, MLK was adopted as iconic figure of the left, not just the black community.
First off, MLK was a conservative. He was a republican. He was also a Christian. He was a pastor. He believed in GOD.

Today, thanks to the elite social controllers, God is a four letter word.   The forces that control Our gov’t officials and the media are doing their best to destroy GOD — After all, leftist indoctrinators AKA teachers are suspending students for saying “bless you” after sneezing finding “bless you” to be “Godly talk” and could upset the indoctrination and offend others.

How insane is that?  So much for individual liberty?   The left can have all the individual liberty to use have their free speech, but yours must be stifled.  They use the Constitution when it serves them, but call it a flawed, outdated document on the next breath.   If you are offended by abortion, the redefinition of marriage, or any leftist held ideology you are a bigot, a misogynist, racist, or worse and must be “reconditioned”, or like Eric Holder said about guns, you have to be “brainwashed.”     How outlandish.   How authoritarian.

Not unlike Islam, the left are absolute totalitarians.   If you offend them, you must be chastised, scourged, beaten!   Only agreement on all leftist issues are acceptable.   The truth be damned.   Morality be damned.  God be damned.  This is the ESSENCE OF TOTALITARIANISM, sheople.  WAKE UP!

These same forces cite racism for calling for immigrants to learn English and conform to the American way of life in favor of thier own native languages. In Denmark, if you are an immigrant and do not learn Danish, the Government will deport you, as they should.

In the elite controlled “globalization” agenda, national borders are to be eliminated. This certainly appears to be happening here in the good old U.S.S.A, has it not? By stripping away the fabric of American life and culture these oligarchs are working to homogenize the U.S., Mexico and Canada via the North American Union.

Traitor George W. Bush sowed the seeds of destruction of Our soverienty and the current Traitor In Chief, Barrack Hussein Obama has opened the borders and is now seeking amnesty by executive order for some 5,000,000 illegal aliens.

If you pay close attention from President Reagan, through Bush, Clinton, Bush and now Obama have all furthered the borderless, one world totalitarian socialist government agenda, you simply have to accept this fact. Denial is not a river in Egypt.

In the years following MLK’s death, if he had lived, MLK would have addressed the growing immorality in Our culture, music/films, etc.

MLK would have been a powerful force opposed to the ever increasing welfare rolls, dumbed down education and drug abuse.

King would’ve opposed the US Dept of Education and addressed the obvious collusion between corporations like Monsanto, the Pharmaceutical and Insurance industries and Gov’t regulators like the FDA, EPA, USDA, and other alphabet soup that destroy competition in favor of large collectivist multi-national corporations.

These forces have infiltrated Our Gov’t at the highest levels. MLK would’ve opposed all the Hegelian wars for oil and corporate profits disguised as acts of “liberation” and “freedom”. He would’ve opposed the Patriot Act and NSA spying. He wouldv’e opposed the black genocide via Planned Parenthood and the dumbing down of our children by Soviet style indoctrination in schools (COMMON CORE).

Sadly, critical thinking goes against the intentional dumbing down of Amerika with the COMMON CORE INDOCTRINATION cookie cutter approach to training compliant workers, not thinkers.

Let us not forget that Dr. King was a conservative who believed in equal opportunity, not distribution of wealth to create “equality” that will never exist. Or lowering standards, like affirmative action, which is racist. As is “My Brother’s Keeper”.

Lazy people create their own lot in life. PERIOD. America is full of success stories of minorities who emerged from poverty and became successful, yet the leftist agenda wants to pat the lazy on their backs and lift them up from their laziness, because things are not fair to minorities.

Well, whites are soon to be the minority in this country, so should we shift all of this affirmative action communist crap to white people and made the Hispanics and blacks pay the freight?

Oh God no–That would be racist! So of course, this is not about minorities, but it is about the de-industrialization and dumbing down of America via directives from the Council On Foreign relations who controls the United States State Department and shaped public opinion via the mass media.

Also, one of the things NEVER DISCUSSED IN HISTORY BOOKS OR IN THE MEDIA WAS THE FACT THAT MARTIN LUTHER KING WAS A CONSERVATIVE! As stated, King would’ve opposed all of this communist infiltration and I truly believe this is why he was killed.

You can’t build a social welfare state by dumbing down minorities with a civil rights leader in the U.S. calling for individual responsibility, now can you?

Bill Cosby was wrongly lambasted by the controlled mainstream media for pointing this out and called a traitor by the communist left. How did liberal democrats (As I was until Jan 2009 when I woke up to the false left/right paradigm) become communists?

The saddest thing is most do not even know they are communists and are willingly embracing their own servitude. They have been indoctrinated and seduced by “fairness” and “compassion” and ignore their own intolerance of other views than their own. How very fair. Where the collective trumps the individual.

This is the TRANSFORMATION OF AMERICA they seek. Where the many outweigh the few. That is of course, democracy. But we are a REPUBLIC, where individual rights trump the collective. This is how America thrived and communism and socialism have failed and will always fail and result in genocide, not utopia.

In other words, MLK was a threat to the establishment’s ongoing plan for a New World Order. When you take all of this into account, the icons struck down from 1963-1968 would’ve made it impossible for the collectivization of America to take place.

These men, like JFK and MLK believed in freedom. Liberty. Justice. And the rule of law. They opposed the tyranny we now face her in America.

MLK would surely have some harsh words for Barack Hussein Obama.    Harsh indeed.

“Where truth the mainstream media ignores is the top story!”
on www.TruthBroadcastNetwork.com

If you seek truth and want to restore Constitutional Gov’t please subscribe and share the valuable information contained on this channel.

Starting in September, 2014 Check out STREAM OF CONSCIOUSNESS, a concept
designed to address the many issues concerning America today in short, concise, unscripted, unedited monologues @ http://www.youtube.com/ConsciousStream   Hosted by Howard Nema