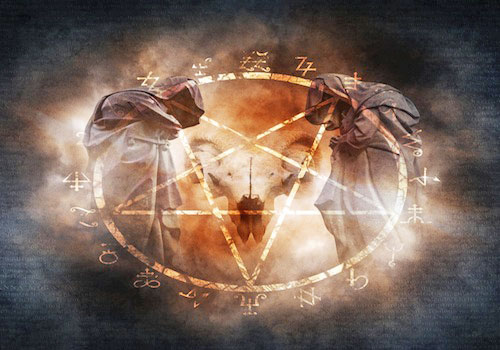 Black magic harnessed through Satanic ritual is the dark force behind it the NWO conspiracy.

Black magic is the force that rules the world, so it is the Satanic black magicians which constitute the true controllers of the world – at least in the human Earthly realm.

The Satanic black magicians pull the strings, not politicians, corporate bosses, military heads, intelligence chiefs or even international bankers – although they also hold many of those roles.

While many Satanic black magicians are also businessmen and bankers, their true ruling power comes from Satanism and the twisted use of humanity’s creative power (black magic), which they then use in their secular roles in society.

Remember the saying of the Chinese sage Lao-Tzu, who said that “symbols rule the world, not rules or laws”?

Symbols are able to penetrate more deeply into our subconscious, which is why the elite are so obsessed with their occult corporate and governmental logos of red crosses, rising suns, all-seeing eyes, pyramids, 666, the rings of Saturn and inverted pentagrams (check out the work of Freeman who has done a great job exposing this).

Words attempt to rule the world, but they can never be as powerful as symbols.

Governments and corporations attempt to rule the world, but they can never be as powerful as black magic.

Before looking at the evidence of elite use of black magic, it is worthwhile remembering a defining aspect of Satanism: the inversion of everything. Black is white, bad is good, wrong is right. This is why the inverted pentagram is such a popular Satanic symbol.

George Orwell touched on this in ‘1984‘ when he wrote of the ruling class’ propaganda:

“War is peace. Freedom is slavery. Ignorance is strength.”

Even mind control, developed by the Nazis first in Germany and later at the CIA, uses Satanic principles to confuse its victims, by telling them that pain is pleasure and pleasure is pain, and eventually breaking down victims so they can no longer distinguish between the two.

Note Nixon on the right, and Reagan on the left – at a time when he was not yet president.

There are some secret societies which are mostly political and economic in nature, such as groups like the Trilateral Commission or the CFR (Council on Foreign Relations), who go around convincing the world about the great benefits of,

There are others, however, whose purpose is shrouded in more mystery, but seem to involve black magic and Satanic ritual, such as the worshipping of dark gods/entities, the acting out of sexual orgies/fetishes and sacrifice, whether mock or real.

The Bohemian Club, located in San Francisco, is one such group. Every summer in the USA, many key figures of the US elite gather in the tall redwoods of northern California at Bohemian Grove.

…and other US presidents have attended.

Alex Jones successfully infiltrated the Grove once, and was able to videotape one of the rituals that took place there, known as Cremation of Care, which involved hooded figures performing a mock sacrifice black magic ritual beneath a 40 foot owl.

On the other coast of America, at Yale University in Connecticut, lies an old secret society founded in 1832 by William Huntington Russell and Alphonso Taft, known as the Skull ‘n’ Bones society, and its members as “bonesmen”.

The late professor Anthony Sutton did some great research on Skull ‘n’ Bones.

Members have admitted having to undergo strange initiation rituals such as making sexual confessions in a tomb, while outsiders have heard chilling howls and screams emanating from the windowless Skull ‘n’ Bones crypt (see embedded video above).

If you think these secret societies are just perverted people messing around, ask yourself:

These guys control the printing presses of the world, and some have more money than they could possibly spend. It’s power they want, not money.

Money is just a means to an end.

A scene from the movie Eyes Wide Shut of Stanley Kubrick,

The ordinary person will never be initiated into a Satanic secret society, nor get close enough to witness what really goes on in there. It is therefore interesting when someone who does get close to that world decides to spill the beans and show the world what’s going on.

Such a person was Stanley Kubrick, the late great film-maker who many suspect (with strong evidence) was part of the US Government’s fake Apollo moon landing in 1969.

Kubrick may have cut a deal with the devil in making a fake moon landing for the elite, because when he handed over the tape for his last film Eyes Wide Shut, he was found dead 4 days later of a heart attack, despite the fact those close to him said he was in fine health and had no history of heart trouble.

Kubrick hints in the film that this Satanic-sexual black magic ritual also involves sacrifice and murder, by implying that one of the women/prostitutes was killed during or at the end of the ritual.

At the Heart of Black Magic – Demonic Possession

Black magic at its core is really about demonic possession.

Since the world is made of energy, not matter, and since energy moves in waves which have frequencies, the Satanic rituals are designed to entrain the energetic bio-frequencies of the participants with that of other dark entities, so that there is a vibrational match.

Once there is a frequency resonance or lock, an exchange can then take place: energy, intent or information can go from one being, place or dimension can be transferred into another.

This works both ways:

the person gets possessed and receives information from certain dark entities, while the dark entities also take something from the person.

This theme of possession crops up again and again when exposing the worldwide conspiracy, and has been going on a long time, e.g. Hitler was reported to be demonically possessed by his aide Hermann Rauschning. 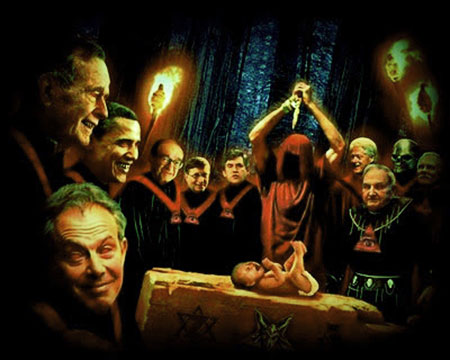 Artist David Dees’ impression of what goes on at Satanic black magic rituals like the Bohemian Grove.

The Horrific Phenomenon of Missing Children

It is also black magic that is behind the unspeakable and unconscionable phenomenon of missing children.

These children are being deliberately kidnapped and taken down into elite controlled underground facilities where they are mind controlled, turned into slaves and where some of them are even sacrificed at Satanic rituals.

If that is too difficult to believe, listen to the testimonies of various mind control victims, researchers, Illuminati defectors or ET contactees, such as,

Conclusion – Focus on the Deepest Aspects of the Conspiracy

Although it’s important to focus on and expose all aspects of dysfunction in our society, including,

…in order to transform and heal them, it’s crucial to realize that, at a fundamental level, they are all connected.

All these issues and more are manifestations of a more primordial evil or unconsciousness in our midst – Satanic black magic.

The secretive rituals conducted at Bohemian Grove and elite mansions tell us more about who rules the world than political think tanks or banking cartels, although of course there is an overlap.

If humanity is to rise up and overcome the conspiracy, we must focus our attention on the root of evil (not the branches), and use “white magic” in greater force – the harnessing and funneling of our creative powers to make a world of peace, freedom and love. We must continue to expose the deepest aspects of the conspiracy.

At the same time, we have to ensure we are not letting the elite siphon off our precious thoughts, emotions and powers to create their nightmarish world, but rather, using those energies within us to create the world we want with positive intention, focus and conscious manifestation.
Sources

HOW WE CAN TAKE BACK AMERICA

HOW WE CAN TAKE BACK AMERICA