Symbols. They are everywhere. They define products, artists, politics, culture–everything.

Prince was no exception.  He certainly wasn’t the first musician to rattle the music biz by embarking on what appeared to be commercial suicide.  He also wasn’t the first to succeed by bucking the system. 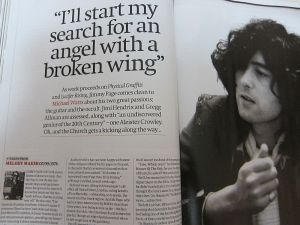 Jimmy Page drove Ahmet Ertegun  insane at Atlantic Records when he wanted to release Led Zeppelin IV with no title.

The album cover was no doubt influenced by Stanley Kubrick’s popular film that year,  A CLOCKWORK ORANGE, depicting an old peasant carrying a cord of wood on his back in a picture hanging on a half collapsed wall set against the backdrop of urban decay in 1971 London.

Led Zep IV, the album also known as ZOSO is one of the top selling albums of all time. 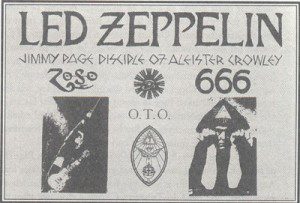 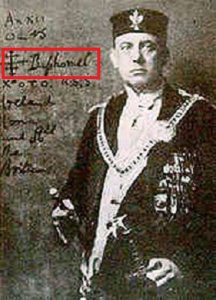 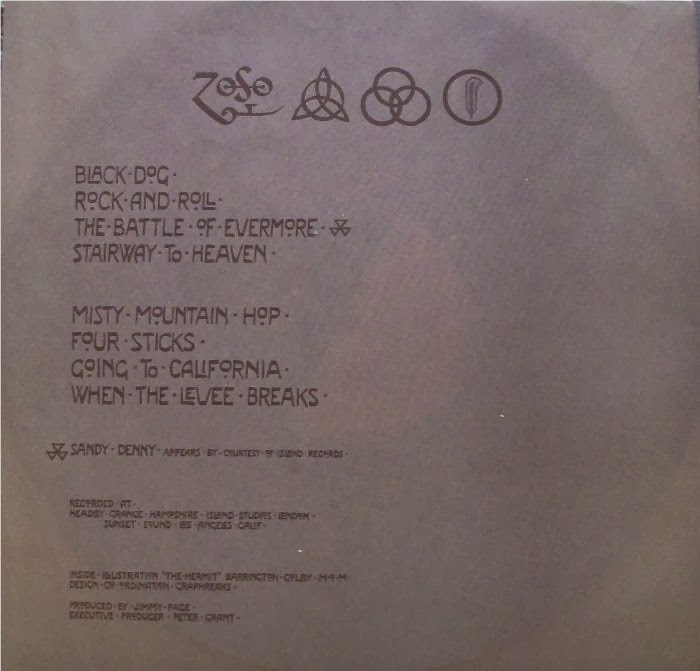 It was Led Zeppelin who first used symbols to identify the members of the band.   The band member’s names do not appear.  Only Page received his producer’s credit on the liner notes.

ZOSO is a cryptic symbol concocted by Page, who claims he found it in an old Druid book.   The others also took pagan and Luciferian symbols as their own, but this was never publicly admitted.

So using Luciferian, pagan and Masonic symbols is really nothing new.    And like in 1971 when ZOSO was released, there is little talk as to the real meaning behind Prince’s “LOVE SYMBOL”.

Excerpts from the so called official story behind Prince’s iconic “Love Symbol“:  The Fascinating Origin Story of Prince’s Iconic Symbol by wired.com on 4/22/16:
In 1993, Prince changed his name to a glyph. It defied phonetics, and it defied his label, Warner Bros., which had been trying to slow his creative output to suit the schedule of its marketing department.
The Love Symbol made trouble for Warner Bros. executives who couldn’t say, or even type, their star’s new name.
Nobody else could, either, which is why news outlets received floppy discs containing a font download of the glyph.

Rolling Stone named it the fourth boldest career move in the history of rock, out of a list of 25.

The Love Symbol was whipped up during a frenzied two days, was largely inspired by Carmen Electra, and was, from the beginning, about much more than business hijinks.

Prince’s new album still didn’t have a name, but the videos included “7,”“SexyMF,” and “My Name is Prince.”

She didn’t say why—Monson and Luce assumed it would decorate an album cover—but said he wanted the icon to fuse the astrologically inspired Mars-male and Venus-female symbols, and he wanted it soon.

“We just took off right away,” Monson says. The two designers toiled away until morning, sketching ideas until Prince came in and quickly selected the design now inextricably linked with his identity.

Look closely at the icon, because there’s a lot happening. Most obviously, it merges ancient symbols for man and woman, creating a new, sexual, gender fluid one.

As a result of working with them, “he really wanted to see this feminine quality to [the symbol], and have this mix of male and female,” Monson says. “He saw those elements being important, and being integrated.”

Look again and you’ll notice the Love Symbol is a hair off balance. The scroll isn’t perfectly circular, and the right side of the cross bar is gently misshapen.

Prince chose this imbalance deliberately. “I get grief for it all the time from people who are like, ‘Can’t you just clean up that logo,’ ” Monson says. “But it was supposed to be that way; he didn’t want it to be perfect.”

Like a human body, it’s asymmetrical, imperfect.  Lastly, the symbol also evokes a cross (with a Devil’s tail pointing down HN emphasis).

It’s impossible to know the depths of Prince’s intentions, but the Love Symbol swiftly harmonizes ideas often in conflict—man vs. woman, sex vs. religion.

(This is the plausible cover story with a grain of truth. HN)

From the beginning, Prince had a roadmap for the symbol, most of which Monson learned only after creating it.

I asked Monson what he thought might become of this symbol now that Prince is gone. Monson thinks it may have a life of his own. “He was about approaching things differently and not discriminating.

He was making this unified statement that everybody should be accepted,” Monson says. “I think the symbol is going to start taking on more of that than it did before.”

Put that way, it’s easy to imagine the Love Symbol joining the canon of iconic symbols—like the peace sign, the heart, or the all-seeing eye—that have helped more than one generation speak up for itself.

(How about that for right in your face.  Yes, the iconic all seeing eye indeed.)

Now that you know the published backstory it is time to delve deeper to learn the hidden meaning and Masonic significance of Prince’s “Love Symbol”.

First off, the male/female aspect in this account of the origins of Prince’s “Love Symbol” appear to be the main explanation, along with a addressing the continuous controversy over sex and religion.

Which should really be addressed as morality vs. immorality.

Neitschze-esque secular humanism has poisoned the world in the century of the self.  Yes.  The explanation of Prince’s symbol as the basic male/female representation is accurate, but there is much more to it.

Despite what has been recorded as the meaning behind Prince’s LOVE SYMBOL, the truth is the symbol  is a stealthy indication of allegiance to the Order.

Prince’s symbol is laced with Freemasonic and Satanic imagery. The Egyptian Ankh, the lion’s tail, the regenerative force and a Christian cross with a devil’s tail aiming down amplify this point. 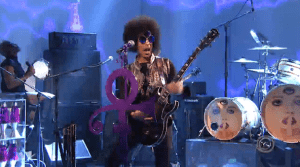 First let’s look at the Masonic significance of the Egyptian Ankh:

Ankh (Crux ansata, Key of Life, Key of the Nile)

The ankh is an ancient Egyptian symbol of life.

It is also known as an Ansata  cross, a visual representation of a sandal strap.

The horizontal and vertical bars of the cross represent the feminine and masculine energy, respectively.

This combination of male and female symbols (the cross and circle) in the ankh suggest fertility and creative power, like the phallus represented by the Egyptian obelisks.   The top loop also symbolizes the sun on the horizon, and suggests reincarnation and rebirth.

The ankh appears frequently in Egyptian writings about rebirth, and this symbolism was adopted by Coptic Christians, especially gnostic sects, to symbolize the resurrection of Christ and the heavenly marriage. The ankh was an earlier form of the cross than the better known “Latin” cross.

The Ankh also has meaning in Luciferianism, ritual magick and in Wiccan/Neo-pagan traditions, as a symbol of immortality and completion.

Above you will notice the zodiac represented as a tail-eating snake (Ouroboros), which symbolizes the eternity of time and the boundary of the universe.

Below it is  the double lion Routi which represents (‘Yesterday and Tomorrow’), and resurrection, supporting the newborn Sun God, who is worshipped by the illumined ones of the Mystery Schools and other pagan faiths.

Notice the zodiac is represented as a tail-eating snake (Ouroboros), which symbolizes the eternity of time and the boundary of the universe.

Together, they and all the many hundreds and thousands of secret societies across the world are the harmonic components that sustain the goals and objectives and protect the secret knowledge of the ages to this day.   It is they who perform the great work in concert and collusion as they build their ideal Utopian world. 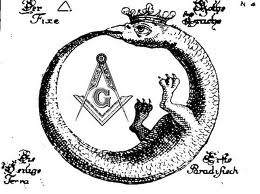 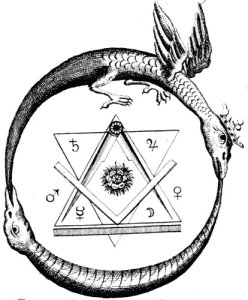 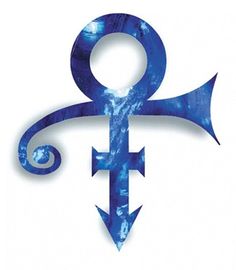 Finally, let’s look at the Cross.  It is a Christian cross.  But the base of the cross is in the shape of a devil’s tail, or a down arrow, both of which have symbolic Luciferian significance.

How the wired.com article ignored the obvious significance of the Devil’s tail amplifies how little these journalists know, or how little they are allowed to print.

With all these recent deaths of big name celebrities and entertainers lately, one has to wonder could it all be just a coincidence? Well, if you take a close look at history you will soon learn, there are no coincidences, but we’ll explore that in another article.

Subscribe to TRUTH TALK NEWS and Howard Nema on YouTube.
“Where truth the mainstream media ignores is the top story!”

It is critical that you take the initiative to confirm the information contained on this FAIR USE site.

If you seek truth and want to help restore Our Constitutional Republic please subscribe and share the valuable information contained on this site. Thank you for your continued support.

Please take advantage of the abundance of information contained on this website.

1 thought on “PRINCE AND THE HIDDEN MEANING OF HIS SYMBOL”