Do you remember that  movie where the main character spends half the film trying to convince others the truth about something very important, something that endangers the town, or even the entire world, but no one will believe them and think they are crazy?

Have you ever felt that way?

This current lockdown on American’s freedoms, shuttering businesses and adding tens of millions to the unemployment lines at a time when 47% of Americans don’t have $400 for an emergence auto repair should alarm everyone.

While the Trump Administration has done much to give relief by banning foreclosures and evictions, the lost wages and lost productivity is far more than a couple thousand dollar government check.

Once again, this reeks of a Rothschild New World Order scam.

With the ever encroaching, strangulations of our freedom and prosperity and the conditioning of the American people to accept ever increasing reductions in our liberties and prosperity, our very liveliehoods to keep us safe reminds me of Ben Franklin.  Who wisely said, “Anyone who sacrifices their liberty for security will receive and deserve neither”.

With the many unknown factors of this current bi-annual election COVID-19 bio weapon psyop, there are some very important things to consider.

Americans are being paid from Our National credit card to stay home and isolated, to only go out for necessities so as not to spread the virus.  All of that money that is debt.  Debt accumulated by money made out of thin air!

America already has $23 trillion in debt. Debt created by money made out of thin air, paid with interest to the Rothschild controlled Federal Reserve.

Once again we are being scammed and fleeced.  Like the sheep many of us sadly are.

COVID-19 is a bio-weapon false flag attack.  A beta test  gauge the public’s reaction to see how far the authorities can restrict us and how far they can push us in the future.

Talk about divide and conquer!  They are literally creating distance between us.  “Social distancing” is the new slogan from the social engineers.  Intentionally creating physical separation of people for months stalls what was a vibrant and growing economy.   And that is the goal.

When you have been working for 100 plus years to create a one world totalitarian socialist government by deindustrialization of the west,   you have to break a few eggs.  Or in this case, let a few bugs out.

Isolating American society, who have so far complied with all of the government’s restriction will also no doubt lead to not a severe case of COVID-19, but rather cabin fever.    The corona virus will undoubtedly do more harm to our economy than the health of our nation.   That is not an accident.  In fact, it is the objective.  With the added bonus of population reduction.   It’s a Malthusian fantasy.   One the elite are salivating over.

Buying stocks and bankrupt businesses after crashing economies is what the Rothshilds and their cronies do best.

Let’s put a few things into perspective about our debt based money supply.

If we paid off the entire National Debt there would be no money in circulation.   The reason for this is because every dollar in circulation begins its life as debt.    The system REQUIRES debt to exist.

If we continued to use this process without accumulating debtthe Federal Reserve Crime Syndicate charging interest on every dollar created as debt and on the balance of all the $20 plus trillion of accumulated debt, giving us debt free money that could pay off the national debt to the Federal Reserve

MLK famously said that the universe bends toward justice. Long before Wikileaks, I have been exposing the shadow government, how it operates and uses figures in positions of high influence from both political parties to operate an organized crime syndicate, controlled by the central banks of the world, whose goal is to gain control over the political and economic systems of every country on earth and create an elitist run one world neo-feudal society.

Now, I know cognitive dissonance will make all of this hard to bear for some.  Especially, if you have dismissed all of this as silly “conspiracy theories”.

The Truth is dismissed by most, because it is not pleasant. It is much easier to ignore, or not believe the truth if it is unpleasant.  Especially, when dealing with evil.  That’s human nature. But ignoring evil will not make it go away.  Evil is an infection.  More dangerous and deadly than COVID-19.

And we are seeing evil disguised as good, widening its grip on humanity over the last few years.   And that evil is intensifying.

We all know there is evil in the world and in our communities and even possibly next door, but most of us, as a survival mechanism focus on the positive and have gratitude for the things we have in life, which is very important, but we also mustn’t wait until evil comes knocking on our door. Just like the fact that freedom requires eternal vigilance, so does exposing evil. 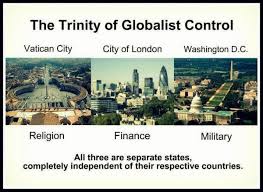 In fact politics in general, and the City-State of Washington, DC, in particular goes far beyond lies, deception, sleazy sex and corruption.   It is evil.  Evil ruled by a self serving force.

Call it what you want.  The swamp, the establishment, the “shadow government.”  It is a bi-partisan entity designed to protect itself, not We the People.  History proves this.  And it seems that these globalist forces are out to bankrupt America into a devastating depression.  To sheer the flock of sheople in preparation for the slaughter.

As we all know, our so called leaders by and large all enrich themselves with crony deals and backroom payoffs, leaving the American People with “crumbs” as Nancy Pelosi would say—

How can we allow this swindle to continue?  WAKE UP!  END THE FED!

In truth, we do not need to levy any taxes or pay interest to international bankers working for world government. We can print INTEREST FREE FIAT money WITHOUT the Federal Reserve and WITHOUT DEBT!

FACE IT! We are debt slaves to the Federal Reserve! We the Sheople continue enriching the CENTRAL BANKERS with out tax dollars to pay interest on the National Debt that continues to rise and actually must rise.

If we paid off the national debt there would be NO MONEY IN CIRCULATION! OUR MONEY IS AS FAKE AS THE FAKE NEWS! Our taxes pay interest, not DEBT!

WAKE UP!  WE ARE BEING FORCED TO PAY FOR DEBT AND INTEREST FROM MONEY MADE OUT OF THIN AIR!!!!

We are now facing a time when for the good of the country, the American People must come together.  But is that possible at such a politically divided time?

Whatever one’s own political beliefs, surely right and wrong cannot be a political double standard. we must do the right thing because it is the right thing to do regarding these shadow government operatives, who are currently creating chaos, mass media panic and anxiety with their latest Hegelian scam, the COVID-19 bio-weapon attack.

Mandated vaccinations and other unconstitutional and totalitarian measures will no doubt reveal their fangs very soon.   Be ready.

“Where news the mainstream media ignores is the top story”