These are the stubborn facts of History. Antony C. Sutton’s seminal book WALL STREET AND THE RISE OF HITLER details these Skull and Bones connections. His earlier work, WALL STREET AND THE BOLSHEVIK REVOLUTION detailed the same connections to the funding of the Boleshevik Revolution. Skull and Bones championed Soviet Russia. If it weren’t for American Banks, there would’ve been no Bolshevik Revolution, or the Rise of Hitler. These are more facts. If this doesn’t shock or anger you enough, Skull and Bones and the Thule Society aligned IG FARBEN and Rockefeller’s STANDARD OIL and created AMERICAN IG FARBEN in 1929.

The alliance continues to this day, although IG FARBEN was broken up into several other companies including BAYER and BASF. The alliance gave the Nazis the ability to make gasoline out of coal by using concentration camp slave labor and a Rockfeller fuel additive. Without this additive the Nazis could not make war. More facts. Are you starting to see the connections and the trajectory history has taken? America now faces this same impending threat from Skull and Bones that Russia and Germany did. It is the same international banking forces that funded the communists and fascists are behind the current New World Order take over of the world. Times change, but these forces always remain, hidden in the shadows and protected by politicians and the media alike. It is obvious if one simply takes the time to look at the evidence as it relates to the ongoing chaos. Can you see it, or are you too blinded by the forest to see the trees? Skull and Bones is the muscle of these clandestine forces.

IBM also counted the Nazi death count at the death camps in Poland. YOU CANNOT MAKE THIS UP! Prescott Bush was busted and slapped on the wrist in 1943 for laundering Thule Society Nazi Fritz Thysen’s million through the Union Bank. The Thule Society and Skull and Bones are both Bavarian Secret Societies.

Heritage Hunt Resident John Grady Passes Away. Long-time Heritage Hunt Resident John H. Grady, Jr., 87, passed away at his home on Thursday, May 30th, according to his family. Mr. Grady and his wife Barbara have been residents of Heritage Hunt since 2001. Mr. Grady was an avid golfer, a member of the tennis round robin group, and a singer in the choir at St. Katharine Drexel Mission in Gainesville. John Grady was born in New Bedford, Massachusetts, the oldest of two sons to John H. and Ellen Sweeny Grady, and was raised in Watertown, Massachusetts. He graduated from Watertown High School. Mr. Grady attended Yale University, graduating in the class of 1948. He interrupted his studies at Yale to serve in the United States Navy during the Second World War, returning after his service to complete his studies. Mr. Grady enjoyed a successful career in business as a buyer and financial planner at the M&M Mars Company, the Reaction Motors Division of Thiokol Corporation, and later at the Bali Division of Hanes Corporation, all in New Jersey.

Mr. Grady was a resident for over 50 years of Livingston, New Jersey, where he was elected to two terms on the Livingston Township Council and served for two terms as Mayor of Livingston. He was also the President of the Livingston Kiwanis Club, a coach in Livingston Little League and Junior Football, and an active member of St. Philomena’s Church. Mr. Grady is survived by his wife of 63 years Barbara; by five children, Joanne Huskey of Bethesda, Maryland, Christine Grady of Washington, D.C., John H. Grady III of Marietta, Georgia, Barbara Grady-Ayer of Albany, California, and Robert Grady of Jackson, Wyoming; and by eleven grandchildren.

In 1976 George Bush Sr. was told to implement Henry Kissinger’s NSSM200. The Bush and Grady Families have known each other since 1947, possibly longer.

These are all indisputable facts of history…. Fauci’s COVID-19 scamdemic lies locked down the entire world and permanently shuttered 60% of all small business and caused fear and chaos. And then there was Fauci’s role in spreading the AIDS epidemic and murdering people with AZT, another “miracle drug” that didn’t stop the spread or symptoms, but it did kill thousands.

This is all part of a wider global depopulation agenda that began in earnest in 1957 after elitists met in Huntsville Alabama to discuss the rising population after World War 2 and create a study to access the consequences of overpopulation. In 1968 a second study was completed by the United Nation’s Malthusian think tank, The Club of Rome. It is the Club of Rome who promote depopulation, crteated the global warming scam and other collectivist agendas disguised as ways to “save the planet”.

On Page 75 of the Club of Rome/UN’s 1992 book, the First Global Revolution by Alexander King and Bertrand Schneider, humanity itself was deemed the “common enemy” of mankind. This book laid the foundations for UNITED NATION AGENDA 21.

The elite controlled media and the democrat party continue to treat Fauci as the second coming of Christ, when he should be treated as Satan.

1 thought on “EXPOSING THE FAUCI-GRADY-BUSH-ROCKEFELLER CONNECTIONS” 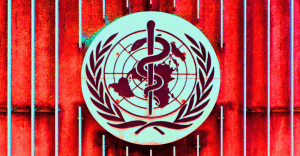