P-lease. Fauci the Fear Mongering Fraudster is at it again! Give me a break. Here we go again with more mind numbing MASS MEDIA BRAINWASHING PROPAGANDA to grind the masses into the meat grinder of globalist domination and control of all aspects of human life, i.e., slavery and genocide. HN

By SHANNON THALER FOR DAILYMAIL.COM

Anthony Fauci warned that vaccinated Americans to still wear a mask outdoors this winter and offered up hope that Covid-19 deaths will continue their downward trajectory in the next few months.

Fauci – during an interview with Greta Van Susteren, which will be aired on Sunday – was asked if he expected another surge in Covid cases this winter caused by different variants.

‘I strongly suspect that you’re going to start seeing the deaths go down similar to the hospitalizations; how quickly they go down and how thoroughly they go down is going to depend a lot on a number of circumstances, which will be influenced by things like the colder weather, people doing things indoors,’ Fauci said.Dailymail.co.uk: News, Sport, Showbiz, Celebrities from Daily MailPauseNext video1:05 / 2:12Full-screenRead More

Deaths have been dropping steadily for the past three weeks – from a seven-day rolling average of 1,767 per day on September 15 to 1,418 on October 7 – and are expected to keep falling at the same rate as the decrease in hospitalizations. 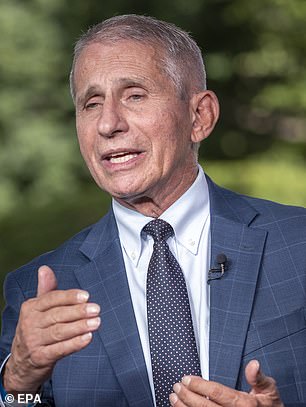 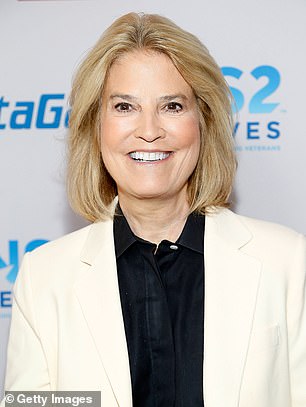 Anthony Fauci (left) told Greta Van Susteren (right) in an interview, which will air on Sunday, that he ‘strongly suspects that you’re going to start seeing the deaths go down similar to the hospitalizations’ 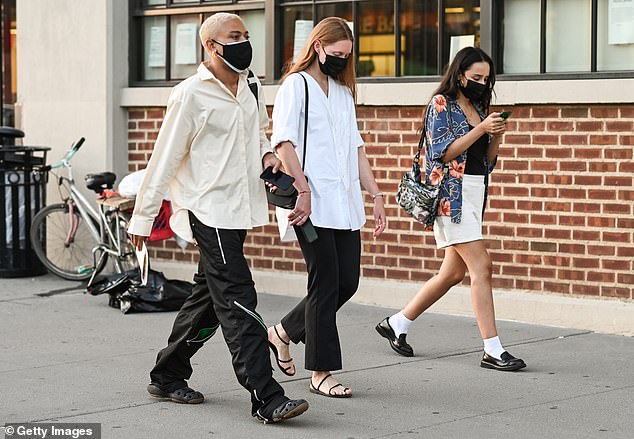 Fauci said that the number of new Covid infections and deaths in the coming months will be influenced by ‘colder weather, people doing things indoors (and) how well they go by the CDC guidelines. He also suggested: ‘Even though you’re vaccinated, when you are not home but outside congregate settings in the public, wearing masks, I think would be very prudent’

Fauci noted that there has been a ‘turnaround in the slope’ in the prevalence of cases and hospitalizations over the last few weeks.

On Thursday, the US reported 110,060 new infections, with a seven-day rolling average of 112,792.  That is a 32 percent decline from the 166,113 average reported four weeks ago and the lowest figure seen since early August, according to a DailyMail.com analysis.

Fauci said that while ‘deaths are still up, it’s really flattening, so it’s a lagging indicator’.

He also stressed that masks should remain in use even by vaccinated people when they step out of their home.

‘When you have a lot of infection in the community, even though you’re vaccinated, when you are not home but outside in congregate settings in the public, wearing masks, I think would be very prudent,’ he said.

Some health experts fear Fauci’s rosy prediction will send the wrong message to the public.

Emergency physician and public health professor at George Washington University Leana Wen told The Hill that she’s concerned people will become ‘complacent because they think that the delta wave is passing us’.

‘We have seen this happen before, where there is a rise in the number of cases, then a decline, and then people let down their guard. And as a result, we plateau at a very high level of cases. That’s unacceptable,’ she added.

On October 1, the US hit a grim milestone and surpassed 700,000 Covid deaths, according to data from Johns Hopkins University. 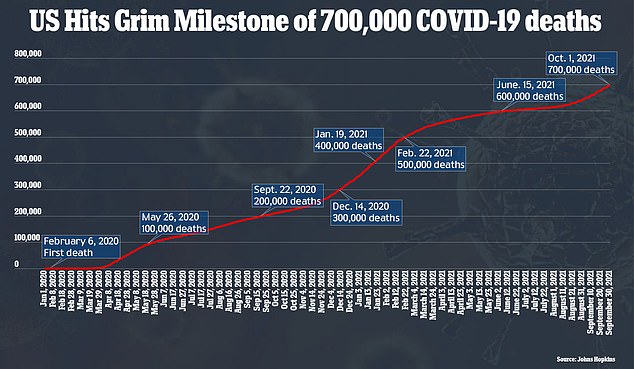 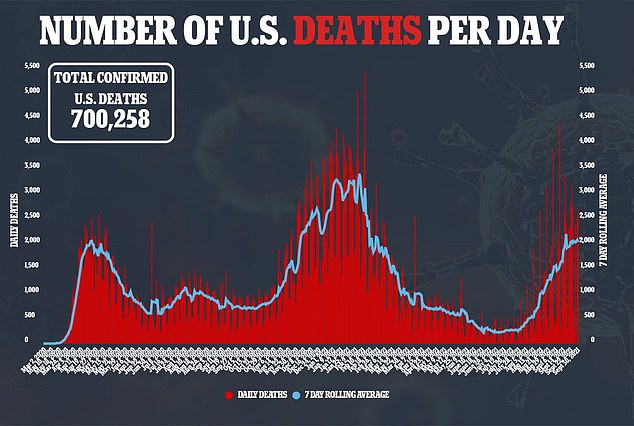 That figure is more than the number of Americans who died during World War I, World War II, the Korean War and the Vietnam War combined.

To put the number into context, it is also about equivalent to the populations of Nashville, Tennessee, or Washington, DC, and just a bit smaller than the population of Denver, Colorado.

More than 4.7million people have died from Covid-19 around the world, according to Johns Hopkins, which means the US accounts for 14.8 percent of all deaths, but just five percent of the global population. 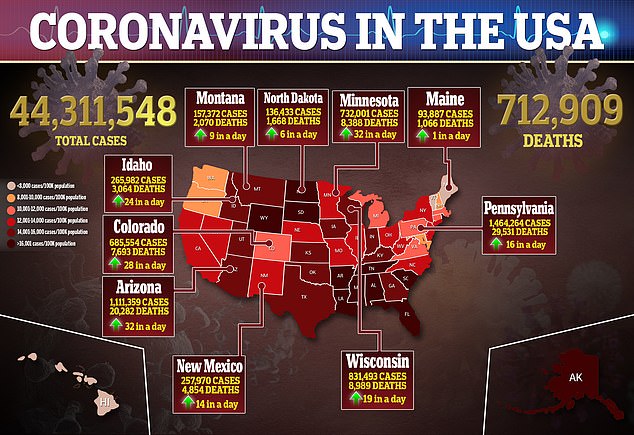 The heartbreaking figures come exactly three-and-a-half months after America recorded 600,000 lives lost due to the virus.

Although the first deaths from the virus in the US weren’t reported until February 2020, it was confirmed last month that the earliest death actually took place on January 9, 2020. 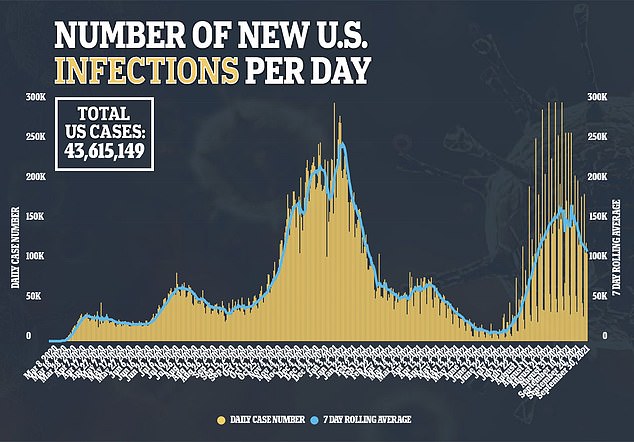 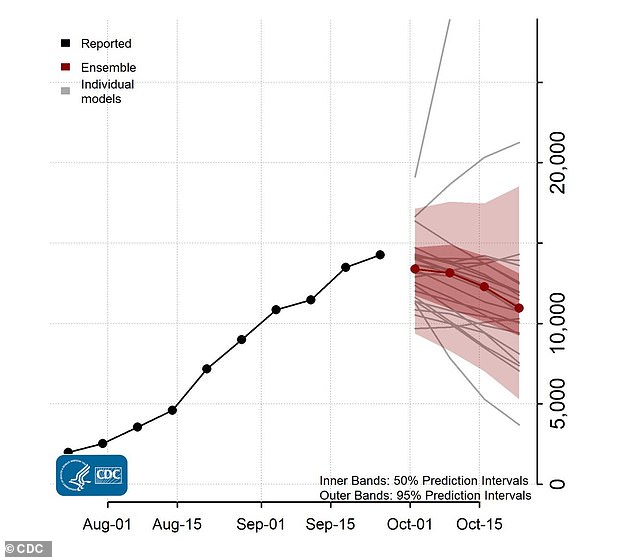 A new CDC ensemble forecast predicts that weekly deaths will fall to as low as 5,300 by the week ending October 23, a decline from the current weekly total of 14,000

The death rate has dramatically slowed, taking four months and one week to hit 600,000 deaths.

As devastating as that 700,000 figure is, the true death toll is believed to be higher than official counts.

Currently, black Americans account for 11.9 percent of all Covid-19 deaths, Hispanics for 26.9 percent, whites for 51.5 percent and Asians at 3.1 percent, each figure about equal to their share of the US population.

However, the Centers for Disease Control and Prevention (CDC) says that after adjusting for age and other factors, blacks and Latinos are between two and three times more likely to die of Covid than whites. Read more:

A COMPLETE OVERHAUL OF THE U.S FINANCIAL SYSTEM UNDERWAY?