By ALASTAIR TALBOT FOR DAILYMAIL.COM and REUTERS and ASSOCIATED PRESS

Canadian Prime Minister Justin Trudeau announced on Monday that his government will introduce new legislation to implement a ‘national freeze’ on handgun ownership and prevent people from buying and selling handguns anywhere in the country.

‘The day this legislation goes into effect it will no longer be possible to buy, sell, transfer or import handguns in Canada,’ Trudeau told reporters.

If passed, the freeze on handguns is expected to come into force in the autumn. Canada’s public safety minister has tabled regulatory amendments in parliament to ensure it can be implemented swiftly, according to a ministry statement.

‘This is the face of a girl who just wants to go home’: Furious mother posts picture of her exhausted six-year-old daughter while stuck in Cyprus after Tui cancelled family’s flights TWICE – as experts warn travel chaos is set to get even worse, and other top stories from May 31, 2022.

The killing last week of 19 children and two teachers at an elementary school in Texas has fed concern about gun violence worldwide. Canada already has significantly stronger gun ownership restrictions than its neighbor to the south.

Canada banned the sale and use of some 1,500 models of assault weapons, like the AR-15 rifle, two years ago. Shortly afterwards, gun supporters marched to Parliament Hill during the Canadian Coalition for Firearm Rights in protest to the ban.

Trudeau’s new legislation, officially documented as C-21, would prevent gun owners in Canada to keep or buy their handguns. Pictured: Gun supporters arrive on Parliament Hill during the Canadian Coalition for Firearm Rights during the pro gun march in Ottawa, Ontario in 2020. 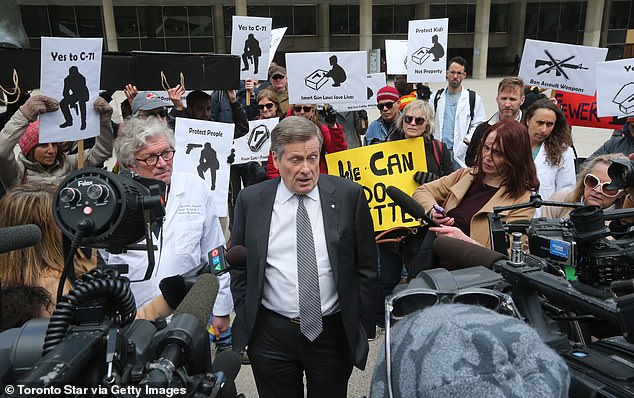 If the new legislation is passed, then it is expected to be motioned into law by the fall of this year. Pictured: Anti-gun protestors in 2019 who called for stricter gun laws in Toronto in front of mayor John Tory 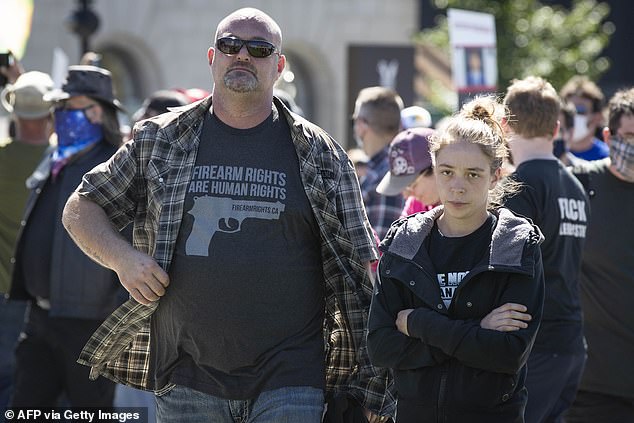 Canada has banned the sale and use of most, if not all, assault-style firearms since 2020. Pictured: Gun supporters on Parliament Hill after the ban was set into motion two-years-ago

Speaking alongside Trudeau, Public Safety Minister Marco Mendicino confirmed the ‘imminent launch of the initial phase’ of a program to buy back and compensate owners of such weapons.

Bill Blair, minister of emergency preparedness, said Canada is very different from the United States, while taking a jab at its gun laws.

‘In Canada, gun ownership is a privilege not a right,’ Blair said. ‘This is a principal that differentiates ourselves from many other countries in the world, notably our colleagues and friends to the south. In Canada, guns are only intended to be used for hunting and sport purposes.’

He also said that guns are often smuggled in illegally from the U.S., which he noted has one of the largest small arms arsenals in the world.

The new legislation, Bill C-21, also proposes taking away the firearms licenses of those involved in acts of domestic violence or criminal harassment, such as stalking.

The government will also require long-gun magazines to be permanently altered so they can never hold more than five rounds, and will ban the sale and transfer of large capacity magazines.

‘Other than using firearms for sport shooting and hunting, there is no reason anyone in Canada should need guns in their everyday lives,’ Trudeau told reporters at a briefing. 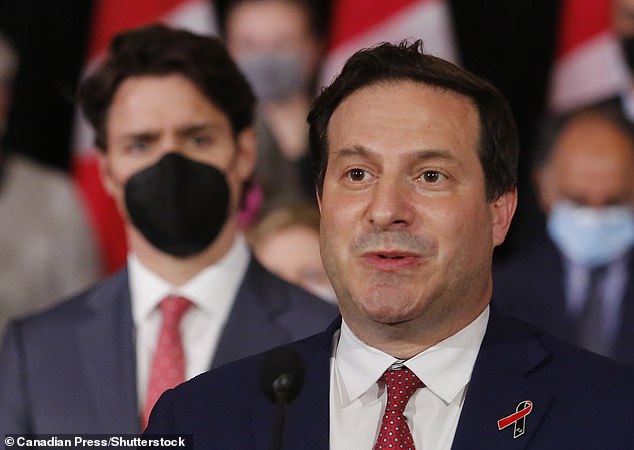 Canadian Public Safety Minister Marco Mendicino announcing new gun control legislation in Ottawa on Monday. The minister argued that the new bill would enforce stricter sentences for gun smugglers and traffickers if passed by the House of Commons. 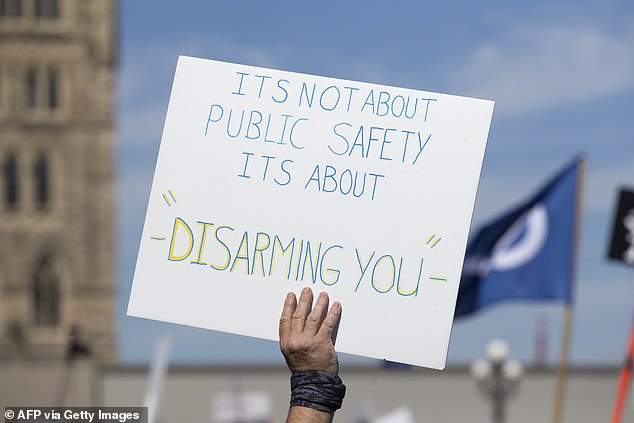 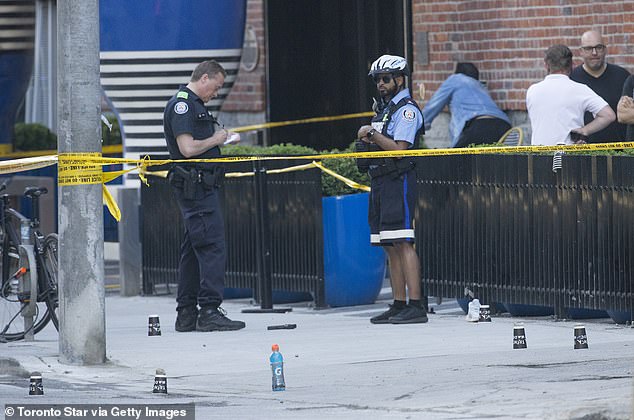 Canada has had far fewer mass shootings than the U.S. in part because of a lack of easy access to guns. Pictured: The scene where a handgun lies on the ground while Toronto Police Services investigate a report of multiple shooting at the Bisha Hotel and Residences in Toronto in May 2020. One person died from the shooting while two others were injured

Canada’s rate of firearm homicides is 0.5 per 100,000 people, compared with the U.S. rate of 4.12, according to a 2021 analysis by the University of Washington’s Institute for Health Metrics and Evaluation.

‘Canada can teach us a lot,’ tweeted Bruce Heyman, a former U.S. ambassador to Canada under the Obama administration.

Trudeau said his government recognizes the vast majority of Canadians who own guns are responsible but the level of gun violence is unacceptable. ‘This is a concrete and real national measure to long way toward keeping Canadians safe,’ Trudeau said.

The new measures are assured of passing in Canada’s Parliament as the ruling Liberals and leftist opposition New Democrats have enough votes.

Pierre Poilievre, who is running to be leader of the Conservative party, said law-abiding gun owners should be respected and dangerous criminals should be jailed.

The bill would create a new ‘red flag’ law allowing courts to require that people considered a danger to themselves or others surrender their firearms to police. The government said the measure would guard the safety of those applying through the process, often women in danger of domestic abuse, by protecting their identities.

NESTLE CEO: HUMANS DO NOT A RIGHT TO WATER, SHOULD BE PRIVATIZED