Skip to content
ARCHIVES » Biden phones hero Coast Guard diver to congratulate him for rescuing lives of Florida residents – just days before he will FIRE him for being unvaccinated as 20,000 members of military face axe

By PAUL FARRELL FOR DAILYMAIL.COM

A Coast Guard rescue swimmer was publicly thanked by President Joe Biden for his Hurricane Ian heroics, days before he is due to be fired over the military’s Covid-19 vaccine policy.

In a press release, Biden expressed his gratitude to Aviation Survival Technician Second Class Zach Loesch: ‘I told him how proud of him I was and thanked him for all the work he and his Coasties are doing to save lives,’ the statement read.

As of September 2022, there are 2,632 unvaccinated members of the US Coast Guard.

Loesch was working alongside Lieutenant Commander Christopher Hooper in his rescue.

The statement thanked the pair ‘for the heroic work that they and their Coast Guard colleagues have performed during search and rescue operations in response to Hurricane Ian.’

The release continued: ‘The President thanked them for saving lives and asked for a report on the work that continues to rescue Floridians.’

‘He also asked if they needed any additional support that he can provide to accelerate successful rescues; they indicated they have gotten what they need to execute their vital mission,’ the statement concluded. 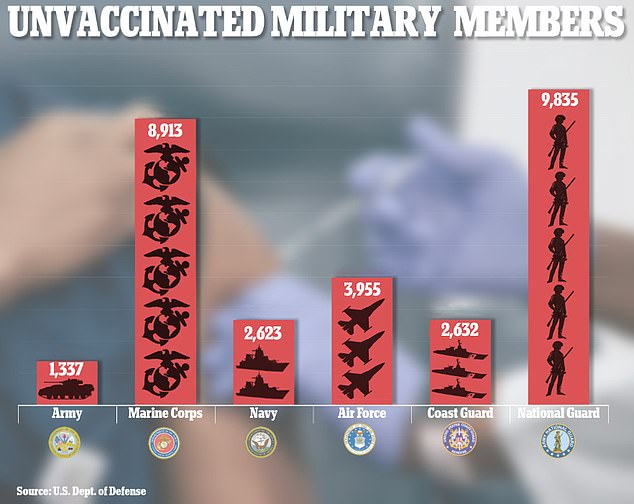 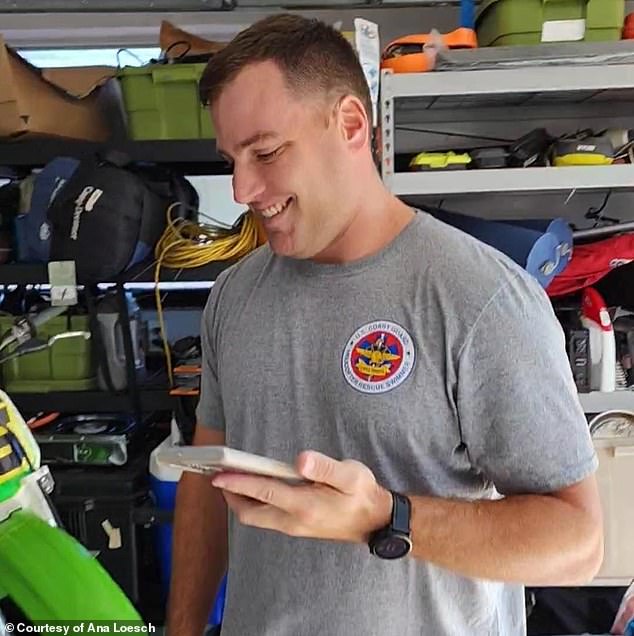 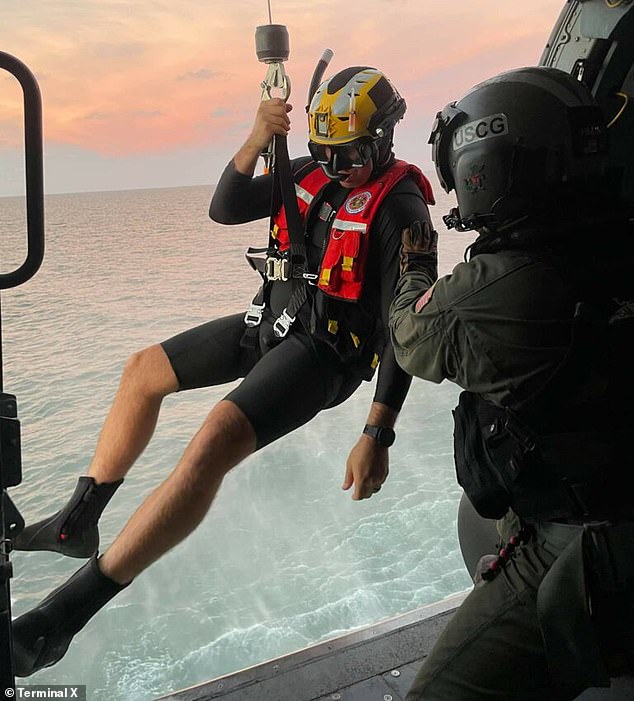 In a press release, Biden said of Loesch: ‘I told him how proud of him I was and thanked him for all the work he and his Coasties are doing to save lives’ 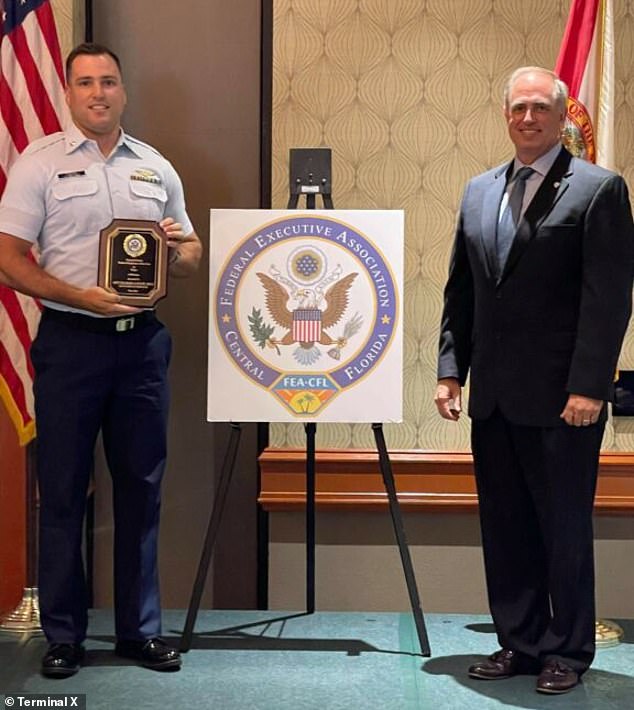 Following the conversation, Loesch told Breitbart in an interview that he due to be fired by the Coast Guard over his vaccine stance

Following the conversation, Loesch told Breitbart in an interview that he is due to be fired by the Coast Guard over his vaccine stance.

He said: ‘If I had asked any of the people I saved yesterday if they wanted to come with me even though I am unvaccinated, every single one of them would have said “yes.”

Despite this, even Pope Francis has endorsed the Covid-19 vaccine.

So far most of those servicemembers who have been involuntarily separated from service over the vaccine receive a general discharge.

This means they are still entitled to benefits and can rejoin the military if they get the vaccine, according to the Military Times. 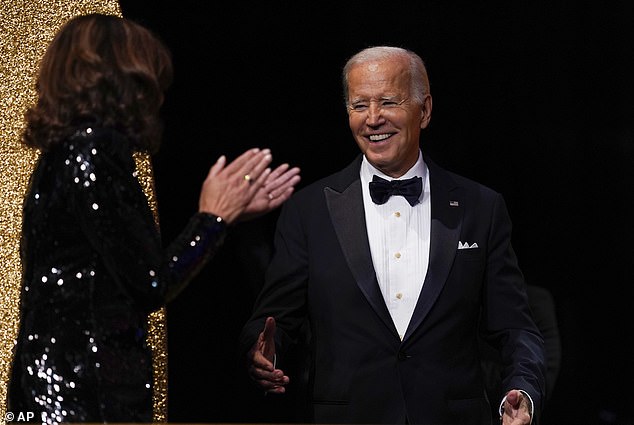 In December 2021, the Biden Administration decreed that military servicemen and women had to be vaccinated against Covid-19

Biden pledges ‘whatever it takes’ to help those hit by hurricanes 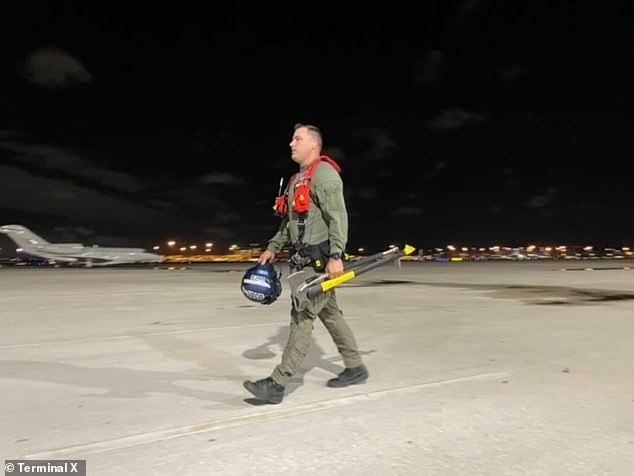 In his phone call with Biden, Loesch said that he did not feel it was appropriate to bring up his impending dismissal

In his phone call with Biden, Loesch said that he did not feel it was appropriate to bring up his impending dismissal.

He said: ‘It just sucks that he thanked me yet the vaccine mandate is what’s kicking me out.’

Loesch added: ‘I just love my job and I’m really good at it. It sucks. I feel like this is the job that I was born to do.’

In addition to his military career, Loesch is an avid disc golfer. According to his official profile on the Professional Disc Golf Association website, he is ranked 971st in the United States and is based in Dunedin, Florida.

On his Instagram page, he declares himself to be a ‘USCG Helicopter Rescue Swimmer’ and a ‘Proud Husband.’

During the rescue, Loesch saved a disabled woman and her husband from a bedroom in their home that they had become trapped in. The rescue swimmer was forced to kick in a wall in order to get to the couple.

From there, Loesch said that he strapped the woman and her wheelchair to his body and hoisted her to a waiting helicopter. In addition, he saved the lives of several pets in the area.

In August, the United States Coast Guard Academy in New London, Connecticut, disenrolled seven cadets for failing to comply with the military’s COVID-19 vaccination mandate, after their requests for religious exemptions were denied.

The cadets, whose names have not been released, were required to leave the campus by August 19.

A lawyer representing the cadets, Michael Rose, said that the youths were threatened with being removed by armed guards from the campus if they did not leave by August 19.

Defense Secretary Lloyd Austin last year made the Covid-19 vaccine mandatory for service members, including those at the military academies, saying the vaccine is critical to maintaining military readiness and the health of the force.

Several lawsuits are challenging that mandate, including two in South Carolina and Texas involving some of the Coast Guard Academy cadets that Rose represents, as well as cadets from other academies.

The military services had varying deadlines for their forces, and the Army National Guard was given the longest amount of time to get the shots, mainly because it’s a large force of about 330,000 soldiers who are widely scattered around the country, many in remote locations.

The Army, Navy, Air Force and Marine Corps are vaccinated at 97 percent or greater and the Air Guard at about 94 percent. Around 90 percent of Army Reserve forces were partially or completely vaccinated. 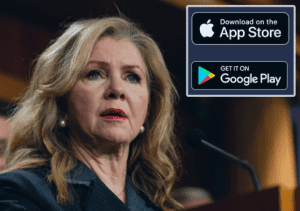 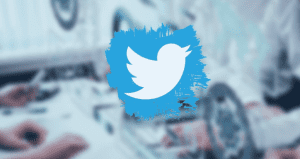 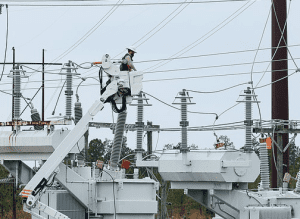 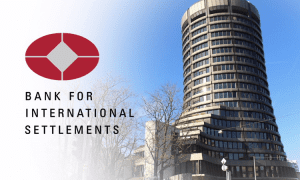